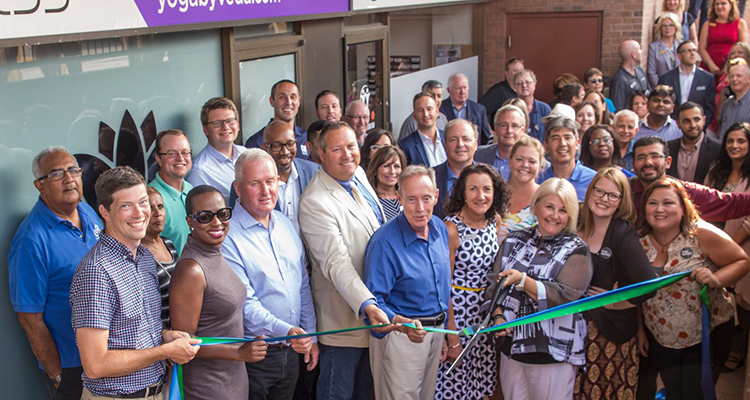 The celebrations spilled out on to the street during the Whitby Chamber of Commerce’s (WCC) Open House & Block Party on August 15. To celebrate the non-profit organization’s new office, located at 209 Dundas Street East in downtown Whitby, the WCC team invited neighbours, members and dignitaries to tour the new space, participate in the corporate art project, and mingle with each other over drinks provided by Brock Street Brewing Co. and Winexpert.

Among the more than 100 guests, many local politicians were in attendance to deliver remarks on this special occasion including, MP Celina Caesar-Chavannes, MPP Lorne Coe, Mayor Don Mitchell and Center Ward Councillor Michael Emm. Before the official ribbon cutting, WCC Board President, Kyle Paterson, also had some words to share with those in attendance.

“I always say the strength of the Chamber is the membership,” explained Paterson. “There are a lot of faces here that I’ve known for a number of years that contribute so much to this organization – as well as many new members! The old office was such a staple in downtown Whitby. It was a place that many members had an emotional connection to, but the work Natalie and the team have done in here is incredible. There is a lot of love in here and I’m so happy to call this our new home.”

Prior to the move, the WCC had operated out of 128 Brock Street South, which originally served as the Public Works building. The move to the new location is positioned in the middle of the WCC’s 90th anniversary year and marks the beginning of an exciting new chapter.

“It’s no secret the Whitby Chamber of Commerce has faced a great deal of change over the past couple of years,” said Natalie Prychitko, Chief Executive Officer of the WCC. “The energy and enthusiasm at our open house were testament to the strength of our membership and the business community. Thank you to all that helped us collectively celebrate this new space and the beginning of the Chamber’s next 90 years!”

In addition to the traditional grand opening ceremonies, guests were welcome to grab a bite to eat from the Gangster Cheese food truck and enjoy the party atmosphere provided by the Step by Step Pro DJ team. This event was generously sponsored by Johnson Insurance, MacAskill Chiropractic and Wellness Centre, and snapd Whitby. The WCC will wrap up its 90th anniversary celebrations at the Peter Perry & Business Achievement Awards gala celebrating business excellence and community contributions on Thursday, November 15. For more information about this annual event, visit whitbychamber.org/peterperry.