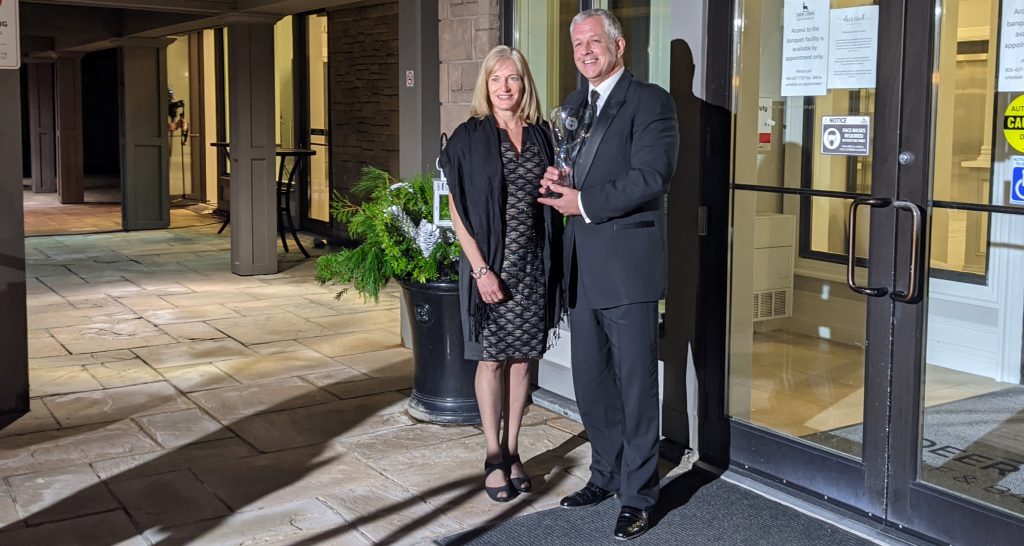 “Are there any Peter Perrys in this room tonight? Are there any in the Town of Whitby tonight?” Judge John Pritchard asked the crowd at a 1955 dinner sponsored by the Whitby Chamber of Commerce (WCC). The following year, the first Peter Perry was awarded to Donald Wilson. Sixty-five years later, this tradition continues, recognizing outstanding contributions made by an individual to the Town of Whitby at the Peter Perry & Business Achievement Awards hosted by the WCC.

On November 12, Mayor Don Mitchell announced the 2020 Peter Perry Award recipient, Terry Johnston. Johnston lives in Whitby and has worked in Durham Region for 28 years as a morning show host of Durham Radio’s CKDO, supporting more than 100 events a year through fundraising as well as showcasing the great work being done in Whitby and across the Region. He is a Queen’s Diamond Jubilee Award winner, has received multiple Rotary Club Paul Harris Fellowship Awards and was the Recipient of the Ontario Association of Broadcasters Award for his work in the community and for his role in giving service and charity groups a voice on the radio. He is a Lifetime Director of Grandview Children’s Foundation and has played a significant role in Epilepsy Durham, Canadian Breast Cancer Society, Heart and Stroke Foundation, Charles H. Best Diabetes Centre, MADD Durham and the United Way.

“It’s not about yourself, it’s about what you can do for others,” said the humble Johnston as he delivered his acceptance speech on the front steps of Deer Creek to a crowd of his friends, colleagues and family. “The late Jim Flaherty told me to talk about what I cared about – the small businesses in Durham Region. Those are the people who organize big events like Run for the Cure and get involved in Grandview Childrens Centre and Station Gallery. Those people put their heart and soul into these causes, and I can give them a voice on the radio. If you’ve written a script or have been one of those organizers, thank you for giving me the show prep.”

In addition to awarding this prestigious honour, the WCC had the privilege of celebrating excellence through the Business Achievement Awards. This year, businesses were awarded in six categories.

“I was just so struck by the words of the recipients this evening,” said Mayor Mitchell in his address. “The passion they show – the creativity, the energy. We are so lucky to have a business community that has those qualities in such depth and who are so supportive of each other. You all deserve our deep thanks.”

The 2020 Business Achievement Award winners are:

In the midst of a global pandemic, the WCC decided to host the annual event with two priorities in mind, providing the business community with an opportunity to pause and celebrate their successes, while also ensuring the safety of all involved. This year’s event welcomed finalists to enjoy a socially distanced meal at Deer Creek Golf & Banquet Facility and watch the show in-person, while the community was encouraged to support local by ordering in and watching the awards from the comfort of their homes.

“I would like to thank the Chamber for the support and love they’ve given us during these challenging times,” said owner of BlueLine Real Estate Group Stephen Jones, who was able to accept the Business Achievement Award 1-15 Employees virtually, live from his home.