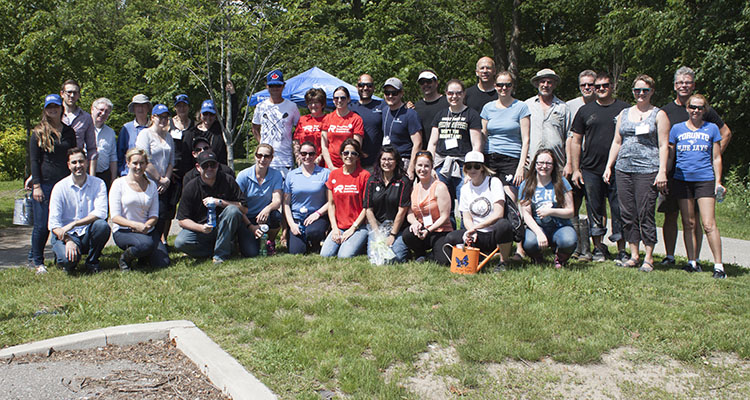 In partnership with Durham Partners in Project Green and Skyview Electronics, the Whitby Chamber of Commerce (WCC) joined forces on June 16 to lead the community in a shoreline cleanup along Lynde Creek in Brooklin.

Participants began the afternoon at Brooklin Kinsmen Park where they enjoyed a delicious lunch provided by Frantastic Events. Shortly after, they were given some gloves and garbage bags and headed to the creek. As they filled their bags, participants were asked to track the items they picked up and drop them off at one of two weigh-in stations where they received raffle tickets to later be entered in a draw to win prizes donated from local business within the community.

“This event is significant it not only helps to solidify the partnership between our organizations but it also helps to ensure our shorelines stay pollution-free for everyone to enjoy,” said Christine Ball, Executive Director of Durham Partners in Project Green.

The idea stemmed from WCC member, Andrew Valyear from the family-run business, Skyview Electronics. While walking by the creek with his nephew, Valyear noticed the amount of garbage that littered its shores. After chatting with WCC staff, the partnership began – resulting in an event that brought members of the community together and removed more than 2,000 pounds of garbage from the creek at its surrounding areas.

“If you ever wondered what people coming together to make a difference looks like, I’d like you to take a look around you and you’ll see,” said Valyear to participants of the event.

The event was sponsored by Skyview Electronics and supported by the Town of Whitby, Regional Municipality of Durham and eV Fern who generously donated supplies for the cleanup.

Garbage from this event was collected under the Great Canadian Shoreline Cleanup program. This program has been held through events across Canada since 1994. In 2015 this program was directly responsible for removing 26,283 kg of waste from Ontario shorelines and surrounding areas.