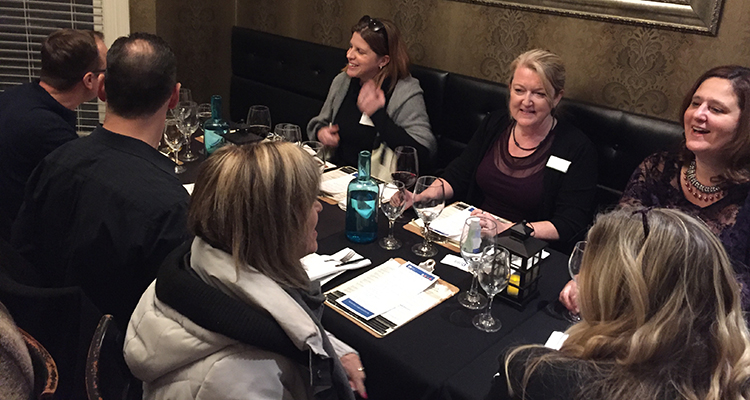 During the first full week back to work after the holidays, members filed into the cozy Harvest Restaurant in Brooklin to kick the year off with some great connections.

After receiving multiple requests from the membership, the Whitby Chamber of Commerce (WCC) team decided to bring networking back to the forefront of Chamber programming with the new Chamber on Tap series. This series allows guests to grab a drink after work, test out local restaurants and mingle with fellow professionals. Facilitated by longtime Chamber Members, Yvonne Brady from Johnson Insurance and retiree Peter Laba, the night began with each guest giving their 30-second intro to the crowd.

“This is what the Chamber family is all about,” explained Brady while gesturing to fellow members. “I look around the room and see so many meaningful relationships. That guy fixes my car. He opened my bank account. The fellow over there re-did my roof.”

But it wasn’t just the old guard in attendance at this inaugural event, many representatives from the WCC’s Young Entrepreneurs & Professionals Committee were on the guest list, as well as a brand new member who joined just a few days prior to the event.

“I almost didn’t come tonight,” said Adrian Joseph from CPA Professional Corporation. “But I’m so glad I pushed myself to get out and meet new people.”

The next Chamber on Tap will take place at Bella Notte Ristorante on March 19. For anyone wanting to support this back-to-basics form of networking, contact the Chamber team about the exclusive sponsorship opportunity available.