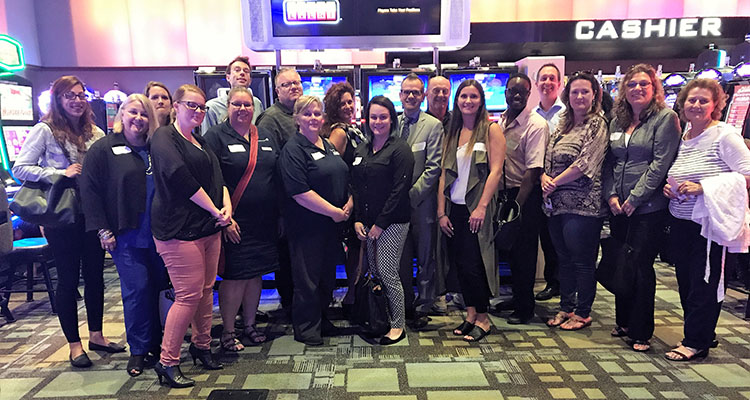 On September 14, members of the Whitby Chamber of Commerce (WCC) tried their luck in a slot tournament at OLG Slots at Ajax Downs.

Players began their evening networking over cocktails in the VIP section of the casino’s Getaway Restaurant. While enjoying a buffet dinner, Ron Horwitz, Slot Shift Manager at OLG, taught players about the different kinds of slot machines offered at OLG Slots and Casinos and how to make their playing experience more rewarding. Before hitting the gaming floor, players were split into small groups and were challenged to practice introducing their company and its benefits in less than five minutes.

After practicing their pitch and getting to know one another, players headed to the slot machines for a slot tournament courtesy of OLG. The tournament consisted of three two-minute rounds. During each round, six to eight players took a seat at their designated slot machine and tried their best to rack up as many points as possible.

Jadie Wright and Erika Andrusiak from Durham First Aid had their game faces on, taking home first and third place and Dean Cantwell from The Village of Taunton Mills got lucky with second place.

“The evening really presented the opportunity to build relationships,” said Corette Miller, owner, new initiatives hr. “It was relaxed and fun – a refreshing way to network!”

Following the tournament, guests were welcome to explore the casino and start gambling.

This event is one of six connect events the WCC hosts, with the support of its annual Connect Partners. This year’s partners include canaPHEM, MacAskill Chiropractic and Wellness Centre, Mikala Inc., Roughley Insurance Brokers, and The Village of Taunton Mills.