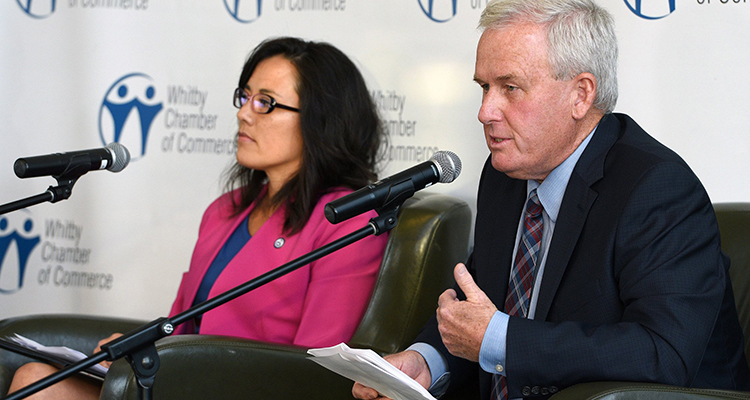 In advance of Whitby residents flocking to the polls on October 22, the Whitby Chamber of Commerce (WCC) hosted the 2018 Mayoral Debate & Candidate Expo to ensure voters were informed. The event took place on September 26 at Durham College’s (DC) W. Galen Weston Centre for Food.

During the candidate expo portion of the event, constituents had the opportunity to engage with ward, regional and mayoral candidates to hear their perspective and proposed approaches for Whitby. Following the expo, Kevin Baker, Principal of DC’s Whitby campus, moderated a question-and-answer session with the two mayoral candidates, Andrea Kennedy and Don Mitchell.

“Durham College was proud to host this important event,” said Baker. “It’s so great to see so many people out and engaged in this municipal election. The Chamber’s Municipal Matters campaign has clearly paid off.”

In January the WCC launched its Municipal Matters campaign, focusing their energy on ensuring the business community was engaged in the municipal elections. In addition to distributing buttons to raise awareness, the Chamber hosted a Municipal 101 with town staff at the beginning of 2018, an MPP Forum in May and a Regional Chair Forum in partnership with neighbouring Chambers and Boards of Trade. In preparation for this series of events, the Chamber collected questions for candidates from its membership through the annual advocacy survey.

On election day, nine town council members, including the Mayor or Whitby, will be elected for a four-year term of office. A full list of candidates can be found on the Town of Whitby website.