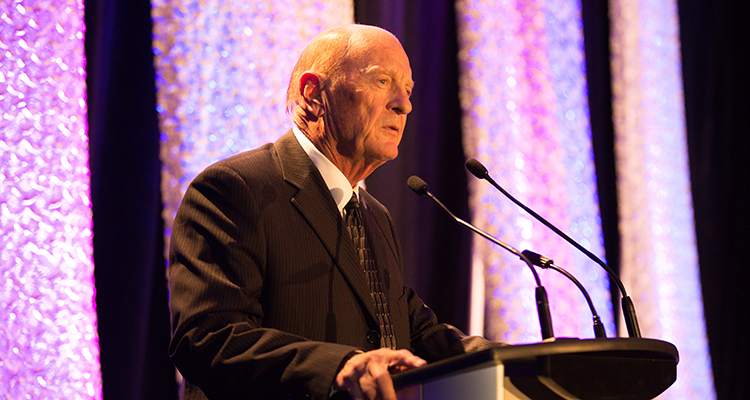 On November 16, more than 300 members of the community came together to celebrate business excellence at the 62nd Peter Perry & Business Achievement Awards, hosted at Deer Creek Golf & Banquet Facility by the Whitby Chamber of Commerce (WCC).

An evening steeped in tradition, the highlight of the gala is the crowning of the Peter Perry award. Originated by Judge John Pritchard, this award honours Whitby’s outstanding contributors and their commitment to the community. At the pinnacle of the evening, Mayor Don Mitchell announced the 2017 Peter Perry recipient: Trevor Bardens. With more than 35 years of volunteering in Whitby, Bardens has sat on many boards and committees spanning at the federal, provincial and local levels. For 39 years, he worked for Miracle Foodmart and A&P, managing and operating stores throughout Durham Region.

After a lifetime of dedication to the Town of Whitby, Bardens has a lengthy list of accomplishments, including serving on the Board of Directors for the Durham Family Court Clinic from 2007 to 2016 and helping small businesses with banking through the Whitby Mayor’s Committee in 1992. Of all of Bardens’ contributions, perhaps the most impressive accomplishment was chairing the Whitby County Town Carnival for 10 years. This annual event took place in the centre of downtown Whitby, bringing the community together every July.

An active member of the WCC since 1987, Bardens served as President of the Board of Directors from 1991 to 1992. Demonstrating his commitment and generosity to the Chamber, Bardens chaired its annual Golf Tournament Planning Committee for 30 years.

“Thirty-five years ago, a woman came into my store asking for a donation to the Whitby Chamber of Commerce,” explained Bardens. “She then told me I should become a member and I did. That was probably one of my most life-changing events. I’ve had so many wonderful things happen in my life by having the opportunity to volunteer and become an active member of this community.”

While still heavily involved in the Chamber, Bardens is now a part of the Seniors’ Liberal Committee, a group collecting information on the needs of senior citizens including insurance, healthcare, and the development of appropriate housing.

Attending the event with his wife Dorothy, Bardens was surprised by his son, Derek, daughter-in-law, Susan, and sister and brother-in-law Marilyn and Fred. Bardens also received a congratulatory call from his daughter Michelle, who is currently in Manila.

In addition to recognizing an outstanding contributor to the fabric of Whitby, the Chamber celebrates businesses of varying sizes and industries through its Business Achievement Awards. Representatives from the event’s Platinum Sponsors, Johnson Insurance; Royal Bank of Canada; TD Bank and Vickery Electric, helped announce the finalists and winners in each category. The 2017 Business Achievement Award winners are:

New Business of the Year

Business Person of the Year

John Draper, Together We Rock! Inc.

The most prestigious night of the year on the Chamber’s calendar, the Peter Perry & Business Achievement Awards gala allows members and the community to celebrate and connect with each other.

“I would like to personally thank everyone who took the time to put forward a nomination,” said Matthew Mackenzie, President of the WCC Board of Directors. “While we all get busy with the day-to-day, it is critical that we embrace the opportunity to celebrate each other and our thriving business community. I am so proud to be a part of this evening because it recognizes your successes, which are plentiful.”