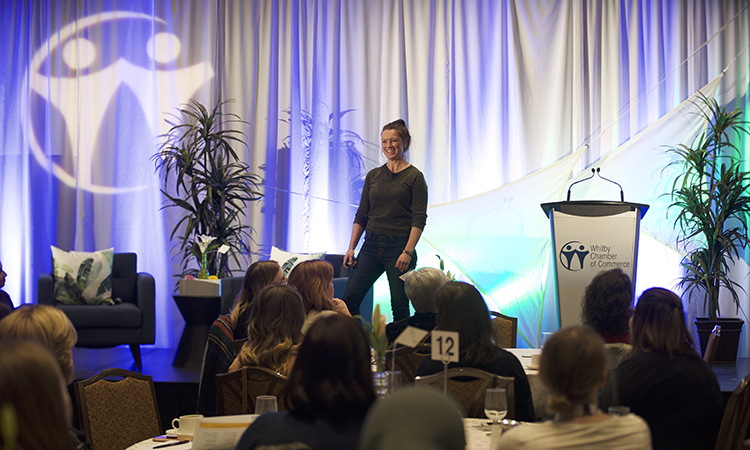 A powerhouse lineup of speakers led the way at the Whitby Chamber of Commerce’s eighth annual Connect Women event on March 21. More than 200 guests filled the Ajax Convention Centre to celebrate women in business at the full-day conference presented in partnership with title sponsors, MacAskill Chiropractic and Wellness Centre and Nurse Chevrolet Cadillac.

Beginning the day was Vice-President of Corus Tempo, Lynn Chambers, who highlighted her career building custom branded content creation and innovative client partnerships at Corus as well as leading brands targeting women such as ELLE Canada, Canadian Living and Fresh Juice. She also outlined her 10 steps to success proving that a positive attitude, calculated risks, a little luck and the right connections can take you far in both life and your career.

Adding to Chambers’ tips was Kelly McDougald, Executive Advisor for the Business Development Bank of Canada who was also the first and only female CEO of the Ontario Gaming and Lottery Corporation. McDougald explained that one of the major factors undermining success is the breakdown of trust, which can be caused by the lack of competency, communication and commitment.

Just before lunch, generously sponsored by PGL Environmental Consultants, long-time Connect Women Planning Committee member Anna Naud from Mason Bennett Johncox sat down with Valarie Wafer, who began her current career path at the Rotary Club of Whitby in 2005. Director on the Board of Rotary International 2020-2022, Wafer explained how philanthropy changed her life, “I am not the same person as I was before I started giving back to the community.”

Although this year’s conference was about leading the way, another common thread began to appear throughout the day.

“We think there are a ton of things getting in the way of our dreams,” explained Vanessa Vakharia, Founder and Director of The Math Guru. “It’s just one thing and that thing is fear.”

A boutique math and science tutoring studio in Toronto, The Math Guru’s mission is to provide a space for students to look at math and science from a different perspective with a focus on reinventing media representations of what it means to be smart while simultaneously destroying stereotypes which tell women they need to choose between beauty and brains. After failing Grade 11 math twice, Vakharia has come a long way now holding a teaching degree and a Masters of Math Education.

“Sometimes you have to just start with doing the thing,” stated Vakharia.

As a high achieving student in high school, Kate Campbell was always presented with university as her only post-secondary option. After taking sometime off to travel, it was Campbell’s mother who showed her a four-month Women In Skilled Trades course based out of Burlington, which lead to her now more than 10-year career in skilled trades. Campbell has been taught by some of Canada’s top renovators and appeared on many HGTV Canada shows such as Holmes On Homes, Disaster Decks and most recently, as one of the hosts on Custom Built. She now runs her own company, KateBuilds Inc., which specializes in small renovations and custom carpentry.

“Everyday I’m challenged physically, creatively and intellectually,” explained Campbell. “When you start to feel uncomfortable, that’s when you have to push through the fear. The view from the other side is beautiful.”

Recognizing that just 4.5 per cent of skilled trade workers in Canada are women, she is extremely passionate about changing the face of the skilled trades industry and recently started Build Women Up, an initiative to fund scholarships for women pursuing careers in the industry.

“If you aren’t given a seat at the table, build your own table.”