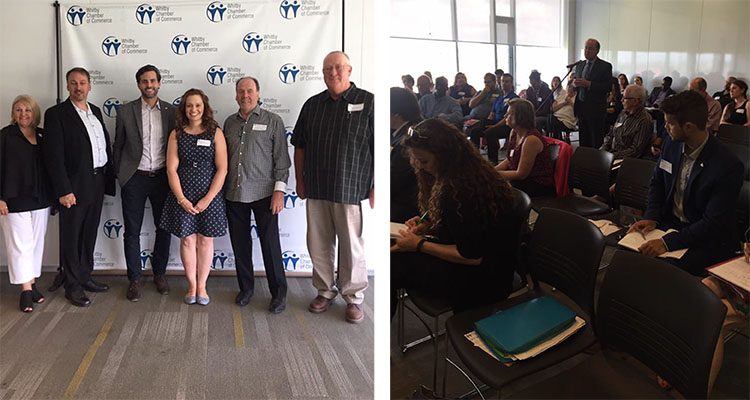 The event was organized by the Whitby Chamber of Commerce (WCC) and featured special guest Karl Baldauf, Vice-President, Policy & Government Relations at the Ontario Chamber of Commerce (OCC). He noted that interest level across the province is very high in the proposed legislation and that he would be visiting 25 additional communities after making stops in Pickering, Whitby, Oshawa and Clarington that day.

Baldauf gave an overview of the proposed changes, provided information about advocacy steps the OCC is undertaking on behalf of Ontario businesses and spoke about how to help employers make the transition to life under the Fair Workplaces Better Jobs Act, should Bill 148 be passed in its current form. “Many businesses are telling us that the minimum wage is the least of their concerns,” said Baldauf.

Concerns raised in the question and answer segment included the potential negative effects the legislation could have on seasonal businesses, possible reductions in youth employment opportunities, loss of apprenticeship spaces, mental and physical health implications for employers and employees, taxation concerns for municipalities, and many more.

The WCC will continue to advocate strongly on your behalf so that your voice is heard on Bill 148, which will have far-reaching ramifications on how business is conducted in Ontario. In fact, we immediately sent a letter to the Standing Committee on this legislation.

Visit the Keep Ontario Working Coalition website to have your voice included in the OCC’s upcoming research report, slated for release in September.