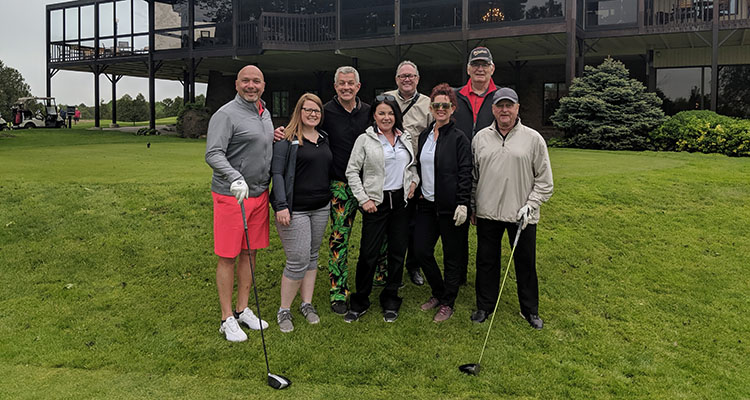 In true Whitby Chamber of Commerce tradition, the weather was less than balmy on June 4 for the Chamber’s 32nd Annual Golf Tournament. Hosted in partnership with Title Sponsor Campkin’s RV Centre at Royal Ashburn Golf Club, the signature event is a major fundraiser for the WCC, helping to support programming in the business community all year round.

The day began with an early breakfast, generously sponsored by North American Steel, and a warmup lead by Pursuit Training’s Michael Finigan and Rotary Club of Whitby Sunrise’s Riblet the Pig. After the golfers took off to enjoy a myriad of on-course activities and treats, participants for the Learn-to-Play session, generously sponsored by Vickery Electric, were escorted to the driving range where they took part in a two-hour golf lesson headed up by Royal Ashburn pros.

After a full 18 holes, golfers entered the club for dinner and cocktails, supported by PGL Environmental Consultants and Gordon Food Services respectively. New this year was the networking-style dinner where guests enjoyed hot and made-to-order food stations before getting their hands on the many prizes up for grabs.

Also new to the agenda this year was guest speaker, Todd Keirstead, who spoke to attendees during dinner about using the power of sport to fuel those effected by a disability.

“There are 4.4 million people in Canada living with a disability,” said Corette Miller, owner of new initiatives hr consulting inc. while introducing Keirstead. “There are a number of benefits to hiring people with disabilities including lower turnover, access to untapped talent, and adding spending power to the local economy.”

A Whitby resident, Keirstead is known internationally for his unbelievable trick shots but has recently put a focus on diversity in sport with his Bring Back the Game Program, the strategic lead of the provision of golf in Canada for the physically, intellectually and visually impaired.

“If today was the last day that you played golf the way that you know it, how would you feel,” asked Keirstead. “For me, adaptive golf is about turning ‘I can’t’ into ‘I can’.”

During his address, he announced an upcoming partnership with Abilities Centre, making Whitby a leader in adaptive golf programming.

Thanks to its generous partners and sponsors, the WCC was able to ensure that despite the wet weather, guests left the event inspired with new connections and prizes in hand.