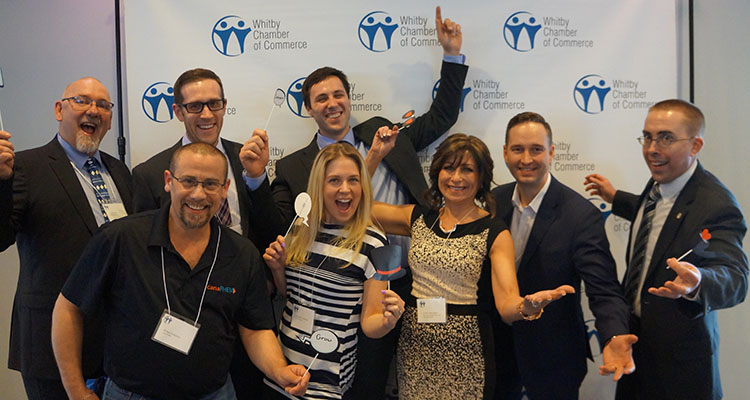 On March 21, Whitby Chamber of Commerce (WCC) members gathered by the lake to see what was on the horizon.

Hosted at the Whitby Yacht Club, members enjoyed each other’s company while not only taking a look back the accomplishments of 2016 but to also get a peak at what is in store for 2017.

Continuing tradition, the 2016/17 WCC Board of Directors was released of their actions and the 2017/18 slate was announced, including new directors voted in by the membership. Mayor Mitchell also swore in the Board’s executive positions: Matthew Mackenzie, President; Kyle Paterson, Vice-President; Brandon McBride, Secretary and Kevin Bathe, Treasurer.

“I’m very proud to say that when I graduated university, one of the first job interviews I had was here at the Whitby Chamber. Life had other plans for me at that time, but this makes having the privilege to serve as President even more special to me now,” said Makenzie.

After motions were passed, Natalie Prychitko, Chief Executive Officer, WCC, announced some exciting initiatives in the works such as the revitalization of the Ambassador program and a revamped nomination process for the Peter Perry & Business Achievement Awards.

“It was a great opportunity for me to meet our membership! I hope guests enjoyed themselves and, most importantly, made lasting connections,” said Prychitko.

Members in attendance also got a sneak peak at the new WCC website, currently in development and set to launch at the end of spring. The website will be a modern hub for members and the Whitby business community, featuring a focus on Chamber stories, benefits and events.

Finally, guest speaker Regional Councillor Derrick Gleed addressed the membership, giving them a peak at the many developments on the go in Whitby, including plans for the Fire Hall and the Land Registry Office.