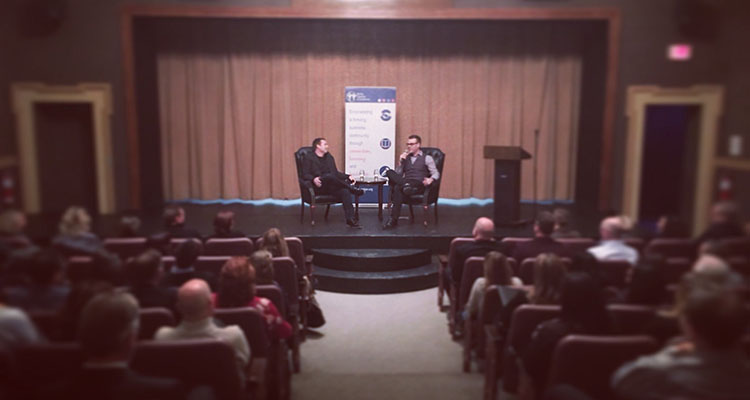 On January 17, more than 70 guests gathered at the Centennial Building for the Whitby Chamber of Commerce’s (WCC) first installment of its newest Speaker Series where host, Jason King, Employee & Channel Engagement Manager at 360insights, gets the story behind some of the region’s most familiar faces.

Before King put his first guest in the hot seat, attendees were able to network in the lobby while enjoying a delicious spread of hors d’oeuvres provided by The Tap & Tankard as well as sample beer from Port Whitby’s newest addition, Town Brewery.

Kicking off the series was King’s boss, Jason Atkins, founder and CEO at 360insights. In 2008 Atkins founded the company, the world’s first Channel Success Platform™, but his story as a technology entrepreneur began long before that. At the young age of 17, he founded his first tech company. Soon after, he sold it and became president and CEO at TMR, a marketing services company in the United States. Realizing there was a gap in the incentives industry and wanting to be closer to his family, he resigned and began plotting out what would soon become 360insights.

“I knew I had a knack for technology,” said Atkins. “So, I leased a commercial space in my name, put up a whiteboard and brought my skills together.”

Atkins’ business philosophy is grounded in workplace happiness and having a strong commitment to clients and the community. Since its inception, 360insights has grown to over 250 employees, quickly filling the 800-square-foot space it began in. Inspired by the idea of life long learning and eager to be a part of Whitby, Atkins renovated the historical R.A. Sennett Public School into 360insights’ new global headquarters.

“The idea actually came from Todd Skinner back in the day,” explained Atkins. “When he was Chief of Staff we started talking about where we could grow in Whitby. He called me one day saying he had found the perfect space, a beat up 100-year-old building. But the vision was life-long learning, where could be better for the company than the place in life where you start learning?”

Atkins continues to make an impact to the fabric of Whitby and the Durham Region. Recently, he became founder and principle investor in the City Flow Project, a localized Durham Region venture capital and tech incubator.

Before wrapping up, WCC’s CEO Natalie Prychitko asked Atkins why he thought participating in Chambers and Boards of Trade was important to him. He replied, “Chambers bring together businesses. Tonight, I talked a lot about learning from other people and their experiences. When you think about Chambers, Boards of Trade and Rotary, they’re all about connections and bringing together like-minded people.”

This event was the first of four in the Speaker Series, hosted at the Centennial Building and sponsored by Motorcity Mitsubishi and Whitby Economic Development. Up next, King will get to know Spark Centre’s President and CEO, Sherry Colbourne, on Tuesday, May 1.